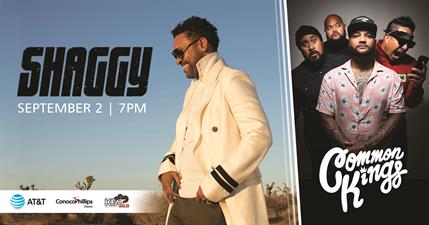 Born Orville Richard Burrell and raised in Kingston, Jamaica, Shaggy got his start as an MC in New York City’s dancehall scene soon after moving to Brooklyn in his teens. Not long after serving four years in the U.S. Marines, including two tours of duty in the Middle East as part of Operation Desert Storm, he inked his first record deal and quickly scored a global crossover smash with “Oh Carolina.”

As the only diamond-selling dancehall artist in music history, Shaggy has sold more than 40 million album units to date, in addition to landing eight singles on the Billboard Hot 100 and seven albums on the Billboard 200, including four in the Top 40. The pioneering reggae/dancehall icon, multi-award-winning songwriter and hitmaker has also received two Grammy® Awards and is among the top three streamed reggae artists of all time on Spotify.

Joining Shaggy on stage are Common Kings, delivering a little rock, a little reggae and a little island style, mixed up with some head-rocking beats and some feel-good vibes. Known for their crazy, fun-loving attitude, the band has produced hits such as “Wade in Your Water,” “24/7,” “Alcoholic,” “Fish in the Sea” and “No Other Love,” as heard on albums including One Day, Lost in Paradise, Hits and Mrs., and Summer Anthems.