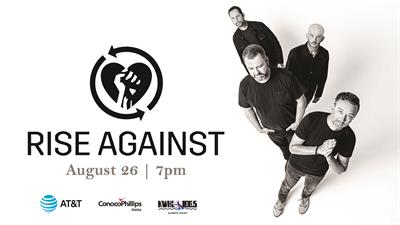 Rise Against at the Alaska State Fair

Multi-gold and platinum band Rise Against blurs the lines between astute punk rock and melodic-driven pop, with their blazing and aggressive punk rock and lyrics.

“It describes a lot of what Rise Against does,” says singer/guitarist/lyricist Tim McIlrath, “to speak and scream when we feel there are things that are happening that aren’t being addressed.”

After putting out their 2001 debut, The Unraveling, which was hailed as “hardcore salvation,” Rise Against found further success with 2006’s The Sufferer & The Witness, which drew in an international crowd for the first time, and 2008’s Appeal To Reason, which featured the gold-certified hit single “Savior” that to date has garnered half-a-billion streams and become one of the band’s six top 10 singles on Billboard's Hot 100 chart.

Rise Against at the Alaska State Fair